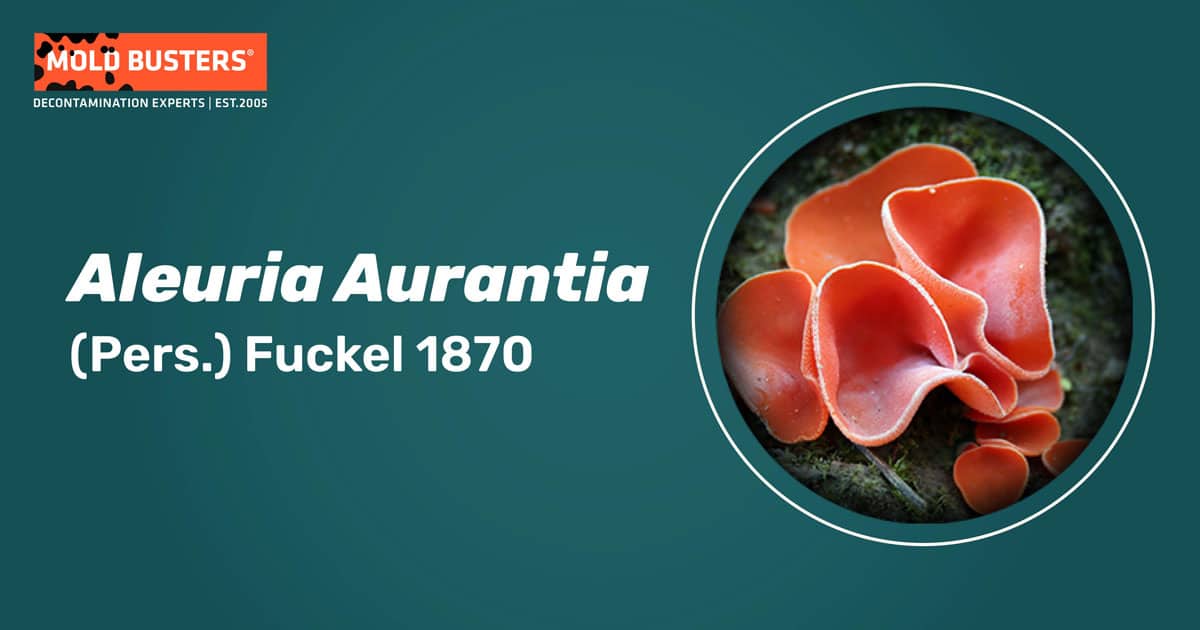 Fungi belonging to the division Ascomycota form the fruiting bodies called ascocarps. Ascocarp contains a protective layer called peridium, composed of thickly interwoven hyphae serving as protection for the asci. Asci usually contain eight endogenous ascospores. Interspersed among the asci are the sterile hyphae of paraphysis, and together they form a hymenium. The following types of ascocarp are distinguished according to structure: cleistothecia, gymnothecia, apothecia, and perithecia (1).

In representatives of the order Pezizales, the ascocarps are most commonly of the apothecium type, with a diameter ranging from less than 1 mm to several centimeters. It is often cup- or disk-shaped, thickset, and brightly colored. The asci usually have a well-developed lid named operculum, the defining characteristic of Pezizales. Therefore, the representatives of this order are called “operculate discomycetes” (1).

Genus Aleuria is characterized by the absence of gills, and their fruiting bodies are epigeous (growing above the ground). Ascospores are always reticulate, and ascocarps are usually over 1 cm in diameter.

The ascocarps in A. aurantia are orange and cup-like, resembling discarded orange peel bits, leading to this species’s common name (orange peel fungus). They are often flattened or may form clusters, while the size of fruiting bodies may range from 2 to 10 cm in diameter (2). There is no pronounced stem/stipe.

It is assumed that A. aurantia is saprotrophic, but some studies are trying to determine whether it may also be mycorrhizal (3).

A. aurantia reproduces by both sexual and asexual means.

As both male and female components of ascocarp (antheridia and ascogonium, respectively), the nuclei of these cell types may coalesce when hyphae of the two cell types come into contact. This process is called karyogamy. After the fusion of the two nuclei, the next step is meiosis, resulting in the creation of four haploid ascospores. This process ends with mitosis and results in eight (haploid) ascospores. Such ascospores are highly resilient, and upon arrival into the environment, they may create a new (haploid) organism.

The asexual form of reproduction in A. aurantia takes place within the conidiophores, where conidia are created. Conidia are haploid spores released into the environments in very high numbers once appropriate conditions are reached.

The diameter of spores is 17-24 x 9-11µm. They are ellipsoid in shape, reticulate, sometimes with appendages at the ends. They are released when the fungus is completely mature, often under the influence of raindrops. The spores are colorless (2).

Where can Aleuria aurantia crustosum be found?

This species may be found on clay-based soil, along the roads or paths, at forest edges, and on sawdust substrate. It is widespread in North America but can also be found in Europe, Asia, and South America, during summer and autumn.

It has a meat-like but unspecific taste. A. aurantia is edible but has no pronounced culinary value (4).

A. aurantia is not toxic but may be confused with certain species of genus Otidea, which may be toxic, and therefore it is always advisable to consult an expert. (4).

Lectins are proteins found in many fungi and exhibit anticancer, antiproliferative (preventing the reproduction of tumor cells), immunomodulatory (amplifying the immune response), antiviral, and other useful effects (5, 6). Studies have shown pronounced biological activity of lectins isolated from A. aurantia and affinity for connecting to L-fucose sugar. This is important, as changes in glycosylation were already proven to be connected with diseases, and these changes may be registered using A. aurantia lectin (AAL) (7). This characteristic of AAL makes them good biomarkers for many ailments, such as diagnosing liver cancer cells (8).

Some studies on antifungal activity of AAL have shown that they inhibit the growth of Mucor racemosus, connecting to L-fucose. In contrast, the two other fucose-specific lectins used in that study, Anguilla anguilla agglutinin and Ulex europaeus agglutinin, failed to show inhibition activity. These results indicate the specific activity of AAL against M. racemosus and possibly against other mold species (9).

Basements in Canada are the most affected by the Penicillium/Aspergillus mold group?! Find out more exciting mold stats and facts inside our mold statistics page.

Basements in Canada are the most affected by the Penicillium/Aspergillus mold group!? Find out more exciting mold stats and facts inside our mold statistics page.