Aspergillus oryzae, commonly known as the koji mold, holds an essential role in Asian cuisine. For centuries, it has been the basis for making fermented food and beverages such as sake, soy sauce (shoyu), and soy paste (miso). Moreover, A. oryzae is today used to manufacture industrial enzymes for food processing because of its large enzymatic machinery. 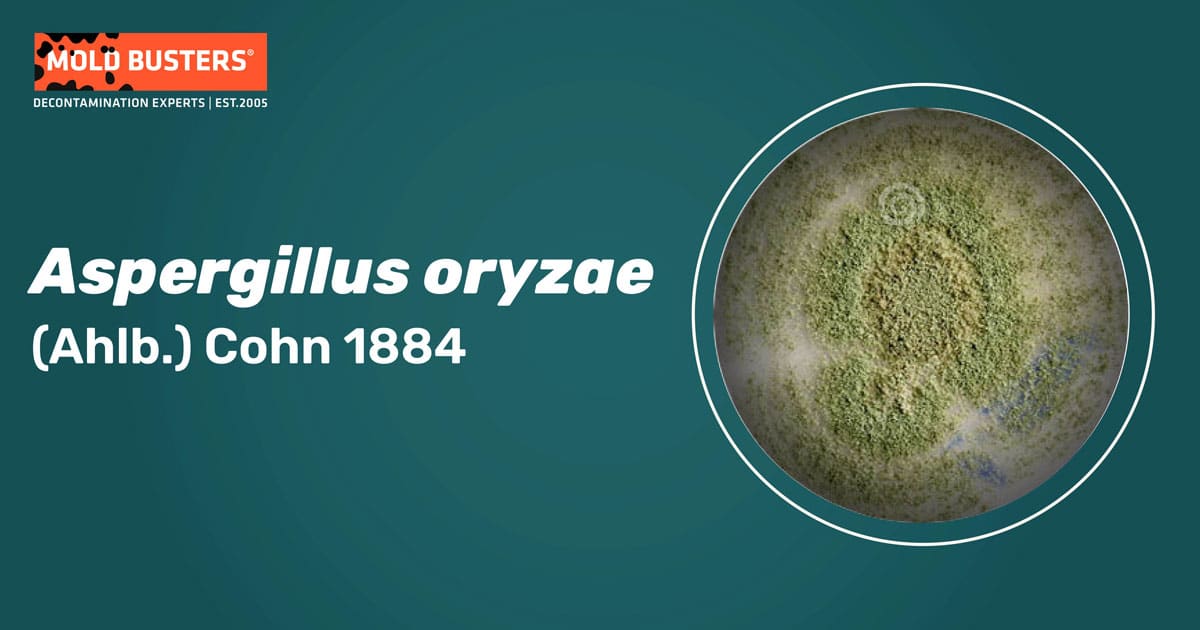 What is Aspergillus oryzae?

Aspergillus oryzae is an aerobic filamentous fungus of the genus Aspergillus. Taxonomically, it is related to A. sojae, also sometimes referred to as koji. Interestingly, although very closely related to poisonous A. flavus and A. parasitica, A. oryzae and A. sojae do not produce mycotoxins and are readily used in the food industry (1–4). A. oryzae can commonly grow in soil and on plants and plant debris, particularly from rice. The Latin name of the species comes from the name of the rice species on which the fungus is grown (Oryza sativa).

Morphology and cultivation of Aspergillus oryzae

Aspergillus oryzae is a filamentous mold fungus, which produces unicellular thread-like structures called hyphae. Hyphae and grow by extension at the terminal tips, branch and form a network of hyphae called a mycelium. Using hyphae, the organism permeates the substrate, which to the mold represents both food and habitat. In this process, the fungus explores and dissolves the starches from its environment. This is how A. oryzae changes the texture and flavor of foods.

Aspergillus oryzae has a fast-growing mycelium, and the hyphae will cover the whole petri dish after only several days of incubation. It grows optimally at the temperature between 32–36 °C (89-96°F), with the maximum limit of 44°C (111°F). A. oryzae thrives in an environment with a 5-6 pH. It needs a minimum water activity of 0.8 to properly grow (5,6).

Hyphal growth will continue in a liquid media until the mycelium gets exposed to the air. However, spore-bearing structures are only produced on firm agar media. When grown on agar, the mycelium is initially white due to the growth of only vegetative hyphae. As conidiophores start to appear, the colony turns to yellowish-green. A mature, fresh colony with formed conidia is green, brown when old. Conidia are spherical to slightly oval, 5–8 µm in diameter, with mostly smooth walls (Fig. 1) (5,6).

The most appreciated role of the A. oryzae in the food industry is its ability to saccharify starchy substrates. Saccharification is a process where simple sugars (monosaccharides) are released from the starch molecule. This allows simple sugars to be fermented by other microorganisms.

The enzymes involved in the digestion of starches are carbohydrases (alpha-amylase, amyloglucosidase, maltase, sucrase, pectinase, beta-galactosidase, cellulase, hemicellulase, and pentosan-degrading enzymes) and proteinases. Carbohydrases hydrolyze carbohydrates (saccharification) and proteins to simple sugars and amino acids. The combined action of these enzymes are monosaccharides such as D-glucose, D-galactose, D-galacturonic acid, D-rhamnose, D-xylose, and L-arabinose.

Proteinases have the role of increasing the rate of protein breakdown to smaller polypeptides (long-chain components of proteins) or single amino acids (building blocks of proteins). A. oryzae produces three acid and two neutral proteinases, which reach their optimum biochemical catalyzation between 20° to 30°C. The mold also produces enzymes called glutaminase, which converts glutamine to glutamic acid. This amino acid is essential for a good quality soy sauce.

Traditional use of Aspergillus oryzae

The common name for A. oryzae in Japan is koji mold. A. sojae also falls into this category, although in a screening study of molds traditionally used in Japan, A. oryzae is the species predominantly used to produce fermented foods of this type. Soy sauce production has two steps, starch degradation and fermentation. The first process is substrate colonization, where A. oryzae (also known as Koji-kin) is inoculated to steamed rice and breaks down starches and proteins (Fig. 2). This produces a starter known as the koji.

The second step in soy sauce production is moromi fermentation. Here, Koji is mixed with salt brine to produce a mash (the moromi) which will undergo lactic acid bacteria and yeast fermentations. This process must last for a minimum of one year at room temperatures to produce high-quality soy sauce. This creates such conditions in which only several (targeted) microorganisms can survive. Under these conditions, the Gram-positive bacteria Pediococcus halophilus thrives and produces lactic acid, lowering the moromi pH to 5.5 or less. Next, the salt-tolerant yeast Zygosaccharomyces rouxii starts to grow, ferment and produce 2-3% alcohol and some other compounds which give characteristic aromas to soy sauce.

Under these salty and acidy conditions, A. oryzae can’t survive and this mold dies rapidly. Interestingly, its extracellular enzymes, possibly released from the mycelium post mortem (so to say), continue to hydrolyze substrates for the growth of the yeasts and lactic acid bacteria. Even though relatively slower because of the salty and acidy conditions, experiments have shown that most hydrolysis reactions occur at this stage, while at the koji stage, these reactions occur only slightly beyond what is needed to supply the needs of the koji mold. Therefore, the most important function of the A. oryzae in the process of soy fermentation is the production of exocellular protease and carbohydrase enzyme complexes.

Even though A. oryzae produces a large specter of valuable enzymes; it is considered safe for food fermentation. While A. oryzae is genetically very closely related to A. flavus, it does not produce mycotoxins under normal conditions. Some believe that A. oryzae is a domesticated sort of the A. flavus (or a closely related species), which has gained various enzymes, increased fermentation rates, and lost the ability to produce aflatoxins through the process of domestication (7,8). Allergic bronchopulmonary aspergillosis due to A. oryzae is very rare. Furthermore, because no reports of A. oryzae infections in healthy humans were found, it is generally treated as a non-pathogenic mold species (5,6).

The genome of Aspergillus oryzae has been completely sequenced and thoroughly investigated because of its multiple applications and importance in several industries (9). The genome of A. oryzae is around 36.7 Mb (36,7 million base pairs) long and has a gene number of 12.079 (9). This allowed for insight into possible reasons as to why koji mold is such a prolific enzyme producer. It turns out that all investigated strains possessed two or three copies of amylase-encoding genes, which differ from each other only in one flanking region. What is important is that all of these genes are functional in the mold. Observed multiple functional amylase genes found in A. oryzae could explain why this species is a hyper producer of a-amylase (5,10).

Offices in Canada are the most affected by the Basidiospores mold group?! Find out more exciting mold stats and facts on our mold statistics page.

Download the industry-standard guidelines that Mold Busters use in their own mold removal services, including news, tips and special offers: