Alternaria are dark-pigmented, saprophytic, and phytopathogenic fungi capable of infecting more than 4000 species of plants. With almost 300 known species, they are ubiquitous. Every year, they cause significant damage to agricultural products, including grains, fruits, and vegetables [1, 2]. Annually, at least 20% of agricultural yield loss can be attributed to various Alternaria species, while species such as A. brasicaceae, A. brassicicola, and A. raphani can cause seed losses reaching over 80% (7). 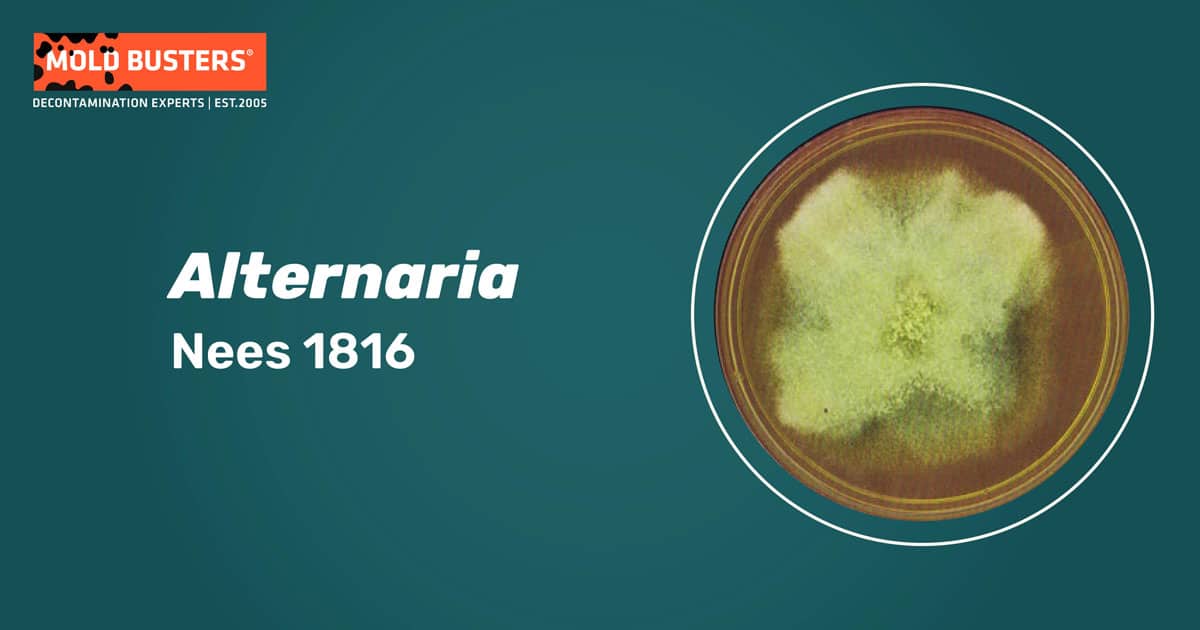 The Alternaria genus contains around 300 species, including Alternaria alternata (one of the most common species), A. tenuissima, A. infectoria, A. chartarum, A. stemphyloides, A. geophilia, and A. dianthicola. All these species are isolated from infections. The causing agents of other Alternaria species have not yet been specified.

Alternaria species can be found growing in various environments, where they obtain nutrients in two ways. Saprophytic species dissolve organic matter and can be found on plants, in soil, and often on food items. Parasitic species infect plants causing leaf spots, or animals, and humans while causing alternariosis.

Alternaria molds can grow at a wide range of ambient temperatures ranging from 1–35°C (33–95°F) and under pH levels between 2.5–10. Optimum growth rates are achieved at temperature ranges 20–25°C (68–77°F). Alternaria molds grow rapidly, with some reaching maturity in 5 days. Just like any other mold, Alternaria thrives in damp and humid areas.

Where do Alternaria molds usually grow?

What are common types of Alternaria?

The two most commonly occurring species of Alternaria molds are A. alternata and A. tenuissima. These fungi can often be found both outdoors and indoors. They thrive during summer and spring and compete for habitats with mold genera such as Stachybotrys, Phoma, and Fusarium. Because it is common in summer and spring, Alternaria spp. is considered to be a common allergen.

What are health problems caused by Alternaria mold?

Alternaria species generally clinically manifest as cutaneous and subcutaneous lesions after trauma in immunocompromised individuals undergoing prolonged corticosteroid treatments. Other diseases, such as cerebral infections, sinusitis, keratitis, and allergic bronchopulmonary mycosis, are very rare and manifest in individuals with very weakened immune systems due to a form of therapy or underlying disease (8).

The most vulnerable people to these molds are those with pulmonary diseases, asthma, allergies, or even those who have a weak immune system. Alternaria has been associated with the onset of asthma in children [4,5]. In a large-scale allergy study in asthmatic children residing in inner cities of the United States, the most common sensitizer was Alternaria spp. at 38.3 % Also, high levels of Alternaria contamination in cereal grain have been linked to esophageal cancer in China [6].

What are the symptoms of an Alternaria allergy?

This mold is a major cause of allergic reactions, mostly during the summer and spring seasons. This is because of the abundance of allergenic spores in the outdoors. Symptoms of sensitivity to Alternaria spp. may manifest as coughing, runny nose, sore throat, sneezing, throat irritation, headache, fatigue, dizziness, red, itchy, watery eyes, and rashes/itchiness of the skin.

As part of the data analysis presented inside our Mold Statistics resource page, we have calculated how often mold spore types appear in different parts of the indoor environment when mold levels are elevated. Below are the stats for Alternaria:

How do you detect Alternaria?

The best can identify Alternaria fungi by the use of professional air testing for molds and by surface spore sampling conducted by professionals. Furthermore, Alternaria alternata is one of the 36 mold species screened by the ERMI test. The Environmental Relative Moldiness Index (ERMI) is an indoor air quality test designed by the U.S. Environmental Protection Agency and the U.S. Department of Housing and Urban Development. ERMI was designed as a standardized test of air quality and mold contamination of U.S. homes. It uses DNA-based technology to assess which adverse mold species, connected with water damage, are present in tested households. It can also give a value of their quantity.

How do you remove Alternaria molds?

Molds may not pose an immediate health risk; however, prolonged exposure can have serious consequences, especially in susceptible individuals. Alternaria grows with time and produces spores abundantly, so if not timely treated, it can quickly spread.

Removing molds by yourself almost always proves very challenging, as most molds are persistent and difficult to get rid of. This is due to the fact that even if you get rid of all visible parts of a mold colony, the spores and hyphal fragments are still present in the air and in the substrate. It is largely recommended to call a professional service such as Mold Busters to remove the mold. We have 15 years of experience in remediating mold using cutting-edge technologies to ensure the complete removal of mold from any residential property.